How to explain Robotic Process Automation (RPA) in plain English

What is robotic process automation (RPA)? What kinds of repetitive tasks can it handle? Here's a primer for IT and business leaders – and anyone needing to demystify the concept 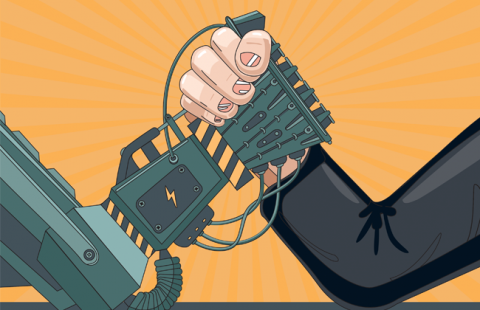 If “machine learning” sounds like the beginning of a bleak dystopian future – think The Terminator mixed with The Matrix – then “robotic process automation” must be the phase when the machines rise up to rule humankind with ruthless efficiency.

Fortunately, robotic process automation (RPA) involves nothing of the sort, except perhaps for the efficiency part. There aren’t really even any robots involved in this automation software.

[ Want a shareable PDF of this article? Get it now: How to explain RPA in plain English. ]

What is robotic process automation?

Rather, the “robot” in robotic process automation is software robots running on a physical or virtual machine.

“RPA is a form of business process automation that allows anyone to define a set of instructions for a robot or ‘bot’ to perform,” says Aaron Bultman, director of product at Nintex. “RPA bots are capable of mimicking most human-computer interactions to carry out a ton of error-free tasks, at high volume and speed.”

If that kind of automation technology sounds sort of, well, boring – especially compared to the Hollywood robots – that’s by design. RPA is ultimately about automating some of the most mundane and repetitive computer-based tasks and processes in the workplace. Think copy-paste tasks and moving files from one location to another, for example.

RPA automates everyday processes that once required human action – often a great deal of it performed in rote, time-consuming fashion. That’s also how RPA promises to boost efficiency for organizations.

Let’s back up for a moment and add some other clear-cut definitions of RPA to our arsenal. Use these to sharpen your own understanding – or to help explain RPA to colleagues, customers, or partners, especially when working with non-technical folks.

Is that process a match for RPA?

Evaluating your internal processes and workflows that would be good candidates for RPA is its own story for another day. That said, there are some fundamental criteria worth noting here since they can help you and your team get a better handle on what RPA is and how it could be useful. Moreover, these criteria can help as you discuss RPA implementation with non-technical colleagues elsewhere in the company. One of the big categories: Any processes that require people to do a high volume of repetitive data work.

“RPA is ideal for tasks involving a high level of human data processing,” says Landreman, the CPO at Olive. “The most common uses of RPA programs supplement repetitive functions or data-intensive processes, where logic-based outcomes are anticipated.”

What can RPA do? Example use cases and business processes

Show people outside of IT how RPA could reduce drudge work in their day-to-day jobs.

Explaining and evangelizing RPA outside of IT should be a bit easier than doing so for other topics that are harder to distill down for non-technical people, such as serverless or microservices. The definitions above speak to this. It can also be easier to show people outside of IT how RPA implementations could benefit them directly by reducing drudge work in their day-to-day jobs. (The same task might be more challenging when it comes to explaining to a field service technician how, say, containerization benefits them.)

Still, the light bulbs usually turn on quicker with accessible examples of how technology can be used in the enterprise. So let’s return to data-intensive processes as a good starting point. Sudhakar reminds us of how many different actions can attend data: data receiving, data processing, data collection, data correction, data creation, and so forth.

Think about the repetitive processes in business functions such as finance, customer service, and HR.

Consider the amount of this kind of work in an area like finance: Receivables and payables alone have traditionally required tons of manual, repetitive effort by skilled workers. This is why you see lofty predictions about RPA in specific business functions: Gartner, for example, has predicted that 73 percent of corporate controllers will implement some form of RPA in their finance departments by 2020, up from 19 percent in 2018.

Other traditional business units, like customer service and HR, offer their own examples of data-intensive, rules-based, and repetitive processes. Specific industries such as insurance and financial services also fit the bill.

Edwards, the COO at Eggplant, offers this specific use case as an example: Returns processing. Think about the last time you returned a purchase you made online, and what that entails not only for you but also the company from which you purchased. Those “free” returns are really anything but.

“Traditionally, returns processing has been carried out manually and has been a costly endeavor. With RPA, companies can manage returns without adding to the cost or causing a delay,” Edwards says. “The RPA software can now handle the return, which includes a series of repetitive steps: sending a message confirming receipt of the return, updating the inventory system, making the payment adjustment to the customer, ensuring that the internal billing system is updated, and so on.”

The steps involved in returning a pair of shoes that didn’t quite fit, let’s say, map quite nicely to Landreman’s criteria above, for both customer and business. It’s a rule-based process that has a particular trigger and is repeatable; it has specific inputs (such as initiating the return and returning the product) and outputs (such as your refund); and for retail businesses, especially, there’s certainly significant volume.

It’s a necessary process with plenty of “opportunities” for inefficiencies, errors, and other issues. And let’s face it: It’s boring. It’s the kind of process that RPA exists to improve.

“The ability to automate [with RPA] allows workers to switch their focus to more thoughtful and meaningful work while also eliminating data-entry errors that can damage processing times, compliance, and the overall customer experience,” Huff from Kofax says.

In addition to business process like the ones we just examined in finance, customer service, and HR, what are the other benefits of RPA? Think about what your organization could do with the reclaimed IT team time, advises Eveline Oehrlich, Chief Research Analyst at DevOps Institute.

"The productivity potential of RPA is too promising to ignore," Oerlich notes. "The technology will continue to improve, but that doesn’t necessarily mean robots are taking away jobs. Ideally, these bots will allow CIOs to free up employees for more meaningful work that will advance their organization’s digital transformation efforts. Also, remind skeptics that many vendors offer free trials so you can experience RPA in action before committing."

How AI and RPA relate

Even as more enterprises tap into RPA, there’s some disagreement on the basic relationship between AI and RPA. As our research report “Executive’s guide to real-world AI,” produced by Harvard Business Review Analytics, notes: “Some question whether RPA qualifies as AI.”

Why the disagreement? RPA doesn't learn as it goes, like, say, a deep neural network. "If something changes in the automated task – a field in a web form moves, for example – the RPA bot typically won’t be able to figure that out on its own," as we have reported.

Even if you take that point of view, there’s definitely a relationship between RPA and AI – a growing relationship.

Dave Costenaro, head of AI R&D at Jane.ai, notes that  as RPA  gets deployed in concert with AI technologies, it gains capabilities.

“The presently booming AI technologies – namely, deep neural networks – are adding brand-new tools to the RPA toolbox primarily in vision and language tasks,” Costenaro says. “Now, the RPA workflows can be enabled by these capabilities at decision nodes where they could not before. This allows documents and images to be ‘viewed’ holistically by an algorithm, and interpreted for downstream logic and routing.”

Editor's note: This article was originally published in May 2019 and has been updated.