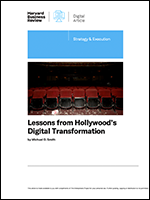 When we first saw the ride of Amazon, Netflix, Google, etc., some of us imagined the demise of major motion-picture studios. But that hasn’t happened. The reason for that is discussed in this HBR article from Michael D. Smith, professor of information technology and marketing: How were studios able to respond to the threat posed by new digital technologies? They changed their existing business model, which involved selling access to scarce content sold in scarce channels by filling seats in theaters, selling advertisements on prime-time television, and selling shiny plastic disks for $20 a pop, and instead rediscovered their underlying business mission — creating great entertainment and getting it in front of the right audience. Guided by that new perspective, the studios began to embrace new technologies and new business models. If a mission-driven response to digital transformation worked in Hollywood, imagine what it could do for your firm. Download this report to discover three lessons learned from what the motion-picture industry did right.