How today’s young IT talent is different from previous generations

For the past 10 years, I’ve had a front row seat to the transition of they way young adults approach IT work. As a professor teaching software architecture at the National Technology University, I’ve witnessed a lot of changes in students today.

First, I need to point out that my class is an elective for students in the final year of their degree. They typically enroll in my “IT Project Architecture” class because they want to learn and they want to get a job after they graduate, which tends to eliminate any slackers from my class.

So what’s different about the students I’ve seen pass my class in recent years? First of all, they tend to be big supporters of the open source way of doing software. I don’t think they see another way of building software than through open source.

Another thing I’ve noticed about today’s generation of IT workers is that they’re often more willing to learn new skills that fall outside their day-to-day duties. I’ve seen this in my other job as IT manager for the public government social and health services agency in Argentina. For example, one thing I try to do is to have our IT infrastructure employees trained to code so that they can automate repetitive tasks. For young people, it’s easier. For older ones, they don’t want to become a developer.

What differences do you see in today’s younger IT talent?

Gustavo is an Information Systems Engineer graduated from the National Technological University (UTN), with over 15 years of experience in IT in different industries, holding varied positions. At present, he is the Information Technology and Communications Manager at PAMI (INSSJP) where he has been promoting the technology upgrade of the Institute with the aim of improving the Argentine health care system. He has been teaching courses on Software Architecture for 10 years and has created the IT Project Architecture subject at the UTN. Gustavo participates in different IT conferences addressing topics like health, creativeness and free software, lecturing about experiences and research in Agile Methodologies, Programming Languages, Software Architecture, Technology and Programming for Children. 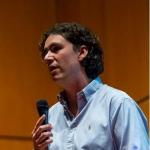 Gustavo is an Information Systems Engineer graduated from the National Technological University (UTN), with over 15 years of experience in IT in different industries, holding varied positions.
» More about me

Body language plays a key role in effective communication. What messages are you sending? Consider these tips for more impactful and engaging Zoom meetings

Great movies, speeches, and business presentations all share one thing: An emotional arc. Consider three ways to apply this technique to your own presentations.