Someday soon, we’ll be able to look back on the idea of big data and laugh the way we do when we talk about other transformative (but now obsolete) technologies like the VCR and the fax machine. We’ll laugh because what we once thought of as transformative will be viewed as nothing more than a quaint stepping-stone. Yes, there is more big data on the way, but we aren’t simply talking about bigger data, we’re talking about data in a third dimension, thanks to the Internet of Things (IoT).

What is the third dimension of data? Put simply, it represents the interaction of data collection, analysis, and decision-making encapsulated and embedded into the product itself. That is the promise of the IoT. But to understand what is possible in the third dimension, it helps to know the strengths and limitations of the first two dimensions.

What is the first dimension of data?

Historically, businesses quantified a relatively small amount of customer transactions and correlated them by using demographics. Essentially, this could be called linear data. Direct mail and CRM environments are perhaps the best examples of linear data in marketing.


The idea of linear, or first dimensional, data was to make direct causal connections that would inform marketing decisions that would then improve success rates and lower costs. If you made more than $200,000 a year, for example, you were a prospect for a luxury car like a BMW. Compared to the alternative — no data mining at all — using income to filter prospects improved efficiency and felt like a giant leap into the future. But from today’s perch, this kind of filtering is incredibly inefficient, especially given the fact that none of that data speaks to consumer intent.

What is the second dimension of data?

For nearly two decades, the digital revolution has been about perfecting second dimension data in the form of behavioral targeting. Inside the halls of ad-tech companies, agencies, and advertisers, the phrase used to describe this is “intender data.” A visit to the BMW website, a few Google searches for car loans, and a couple of articles from automotive publishers, and the signal is sent to the advertiser that you intend to buy a car. This is why a few years ago, people started noticing that ads for products they had shown some interest in were following them around the Internet. Putting aside the fact that tracking users like this is a little creepy, in truth, it’s also very crude.

Cookie-based advertising can be used to infer intent, but only to a point. An advertiser can infer intent from consumer behavior, but not every consumer who behaves within the parameters of a predictive algorithm is in the market or has the financial resources to become a customer. Just as telling, plenty of existing customers may never have exhibited the signs of a predicted intender.

First dimensional data, therefore, may be over-inclusive because not everyone above the income threshold will want to buy a BMW or be in the market. But second dimensional data can be both under-inclusive and over-inclusive. It misses the customers who don’t actively display intent through their online behavior (those who don’t trigger the algorithm by going to the right websites or those who use ad blockers, for example). Second dimensional data can also overcompensate by including prospective customers that may generate signals of intent, but who are incapable of buying, like the website visitor who is a teenage car geek without any income at all.

How data addresses the flaws of the first two dimensions

As the Internet of Things grows exponentially, the data stream that comes from person-to-machine and machine-to-machine connectivity will swell. The potential economic impact will be enormous and quite possibly much bigger than we can predict. Now, consider the example of the BMW in that context. Today’s many car models are already connected via the web to both the dealer and manufacturer. If you collect and analyze the data that streams from the car — something that’s already happening — you can determine when the car is due for repair and even replacement. Put simply: IoT for car manufacturers is about managing the cost of sales and marketing; we’ve arrived at the point where the most precise method of customer identification and intent can be determined. The product, which is in the best possible position to know, initiates the purchase cycle.

Of course, the IoT revolution and the subsequent arrival of third dimensional data won’t be confined to the automotive space. Not by a long shot.  Many, many products will collect their own usage data and generate profiles, and as a result, most, if not all, consumer and business data will evolve from predictive to deterministic in nature. Wearing a pair of sneakers, lighting your home, or even stocking the refrigerator and tending to the landscaping at your home—these acts will all become part of a collection of performance data that will be analyzed in real-time to determine maintenance requirements, and then schedule repairs or replacement as necessary.

Marketing has often been viewed as art informed by instinct and analytics. In the world of third dimensional data, business models will adapt and change—perhaps to long-term service and subscription models for common household products and activities. This would curb the need to shop and increase the value of every new customer—and with it present a new challenge to marketers who might just need to find new dimensions for creating demand.

Ray Kingman has been at Semcasting, Inc. since its inception, leading the company in the development and commercialization of its automated targeting and data offerings. As an experienced innovator in content management, analytics and data visualization fields, Ray directs the day-to-day operations of Semcasting, Inc. 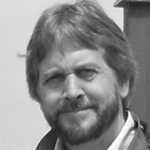 Ray Kingman has been at Semcasting, Inc. since its inception, leading the company in the development and commercialization of its automated targeting and data offerings. As an experienced innovator in content management, analytics and data visualization fields, Ray directs the day-to-day operations of Semcasting, Inc.
» More about me

Poll: What are IT's most-wanted tech skills?
Submitted By Enterprisers Project
February 21, 2020

You hear it all the time: a colleague using an IT term incorrectly or relying on corporate speak to convey their message. Here are phrases our community would like to erase from business and IT speak