5 tenets you can adopt to make IT run faster

In the IT organization at the American Cancer Society, we have five core tenets to help us become more successful in how we structure our IT architecture and our organization. They are:

We live by these tenets in IT because we know that if we can be all of these things, then we have a foundation to become the best fast-moving organization possible.

In other words, if we’re simplified, that means we are easy to do business with. If we’re standardized, there is one e-customer database, not seven. There is one data dictionary, not a dozen. There is one CRM system, one general ledger, etc. Security is, of course paramount, and efficiency and effectiveness are two sides of the same coin.

This is not, of course, an inward-facing approach, because we are here first and foremost to accommodate our “business,” which happens to be a lifesaving mission of ending cancer as a world health problem. Each tenet sets the foundation for action because, regardless of how fast the business wants to go, I have to be those five things. I don’t even have to know exactly what we’re going to do, or how fast we’re going to go; if I am those five things, or I’m striving for them at all times, I’m ready.

You always hear CIOs lament the fact that, “Well, I don’t have a strategic plan.” And so they sit idle. My response to that is, if you have five versions of the same application or different applications doing the same thing, you know you’re going to be better off with one of them. Work toward that. Work to standardize. Then you can at least begin to have conversations around modernization.

And certainly the business cases are there to prove the wisdom of these tenets. Having a conversation with the CFO is much easier when you can use his or her language around total cost of ownership or long-term investment and the economics around what it costs to support legacy systems. There is an educational component, too, to teaching the organization how to think in a more agile way. We’ve implemented pieces of agile development here, and it has been important to get IT and the organization to think that way. The old process of design, build, test, run is not often the way that you become fast.

So we think much more iteratively now. We always think about the end zone. But we also think about reaching the end zone in four-yard runs, five-yard passes, ten-yard sweeps, those kinds of things. It’s not always going to be the Hail Mary that you spent two hours drawing up that’s going to score the touchdown. You’re going to get there five yards, three, eight, two yards at a time. And every now and then, you’re going to get sacked and that’s going to be okay because you’ll make it up on the next play. And so we’ve become an organization that is good at recognizing that as long as we’re acting on our core tenets, we are going to win the day in the end. 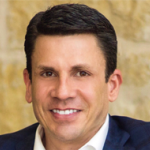 Jay Ferro is an innovative technology leader who works with diverse global corporations to accelerate growth, improve profitability, and achieve exceptional operational results. Jay has spent the last 2+ years working as interim leader with multiple organizations in the private equity, turnaround, and M&A space.
» More about me