A seat at the Thanksgiving table: Business leaders share the techies they'd invite 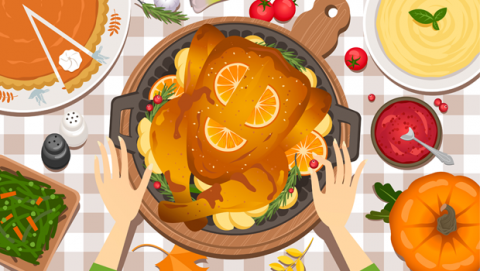 At the Thanksgiving table, there's a bounty of food, lively conversation, and always room to pull up another seat. We asked business and technology leaders – If you could invite one technologist of the past or present to be your special guest this year, who would you pick? Here's what they had to say.

“I’d invite Yves Behar. He is a Swiss designer who has collaborated with technologists to bring to life design work that emphasizes the integration of sustainable products that do social good. He’s not a traditional technologist himself, but he was the innovator behind Jawbone and August, which have revolutionized the wearable and smart lock industries.
The reason why I think he would be so interesting is that he understands customer experiences and transforms them. He’s a very interesting person, a different designer who has a whole plethora of things that he has worked on, with a unique approach. So he would be my guest, and we would debate, over turkey, all kinds of different and interesting things.” – Jean Holley, CIO of Brambles

Techie on his toes

“I’d love to have Steve Wozniak to dinner because we share two common interests: technology entrepreneurialism and ballroom dancing. Certainly, as a CIO you almost have to embrace technology entrepreneurialism, but my true passion for the last 17 years has been ballroom dancing. So to be able to hear his stories on both bringing technology to the world, and his experience on ‘Dancing With The Stars’ would be awesome.” – Sam Lamonica, CIO of Rosendin Electric

“The first name that came to mind is Nathan Myhrvold, who was formerly the chief technology officer at Microsoft. He would be an ideal guest because, I hope, he would be willing to try out some of his gourmet recipes. Myhrvold is founder of The Cooking Lab and lead author of ‘Modernist Cuisine: The Art and Science of Cooking, Modernist Cuisine at Home,’ ‘The Photography of Modernist Cuisine,’ and the book ‘Modernist Bread: The Art and Science.’ That, along with his conversationalist knowledge of technology, make him, the ideal guest in my view.” – Steven J. Hausman, Ph.D., president of Hausman Technology Presentations

"The techie I would have liked to have Thanksgiving Dinner is Jim Gray. Jim was a unique technologist with a keen sense of what was possible in technology, what is important to business and customers, and a unique ability to simplify and evangelize the core idea. He had repeatedly pushed the industry to adopt new ideas and think beyond the obvious. Relational databases, transactions, modern scale-out architectures owe their existence and popularity to him." – Sameet Agarwal, VP of engineering for Snowflake Computing

“Augusta Ada King-Noel, Countess of Lovelace. Why? She was an English mathematician and writer, known for her work on Charles Babbage's early mechanical general-purpose computer, the Analytical Engine and clearly a pioneer of the machines we use today.” – David Bray, CIO of the U.S. Federal Communications Commission

“As an automotive engineer and entrepreneur, I can’t help but be in awe of Elon Musk. If I could pick any ‘techie’ past or present to have over for Thanksgiving dinner I would have quite a difficult time. I’d be inclined to pick Nikola Tesla, DaVinci, or Kettering. But Elon Musk is someone who cannot be ignored. He defied all odds and has somehow managed to build the first successful American car company in nearly 60 years (after Ford), founded Space-X and Hyperloop, and is involved in a plethora of innovative, forward-thinking projects. How he does it all I can’t begin to imagine – and that’s exactly what I’d like to discuss over some tasty pecan pie. The larger lesson I’d love to learn, however, is what Elon’s formula is (or even if there is one) for determining what products to build and what strategies to employ to ensure their success; as it seems that everything that he touches turns to gold.” – Shayrgo Barazi, founder of CarSumo

“I would be most interested in having dinner with Bill Gates. He's more business driven and knows how to surround himself with the right people to take a company to the next level. I'm more interested in that then learning how to do it all myself. I'd be really interested in getting any advice possible from him on how to build the right team and scale a business.” – Brandon Howard, CEO of All My Web Needs

"Hands down, I would invite Ben Horowitz, co-founder of Opsware and the venture capital firm Andreesen Horowitz. I recently read his book ‘The Hard Thing about Hard Things’ and believe that he has played a huge role in some of the most significant contributions to the enterprise software field, in which my own SaaS company operates. Apart from more actionable advice about the business, I want to see if he really is as grotesquely profane as he and his peers claim. That should really spice up my Thanksgiving!" – Dimitar Karaivanov, cofounder and CEO of Kanbanize

"I’d pick Neil Stevenson. So many of his books have predicted and inspired technologies that didn’t come into existence until decades later. ‘Cryptonomicon’ envisioned cryptocurrencies like Bitcoin 10 years before it was invented. ‘Snow Crash’ showed us what Second Life would look like 11 years before it became a reality. Being able to reliably envision the future is a rare talent. He is a modern techie Nostradamus." – Lucas Carlson, senior vice president of strategy at Automic Software

I’d invite Grace Hopper. She invented the first compiler for a computer programming language plus she has inspired generations of men and women to follow in her footprints.  – John Marcante, CIO and Managing Director of Vanguard's Information Technology Division.

“Steve Jobs. We are a big house of Apple products. What he’s created for the company is incredible, and it would be fun to meet him personally. I know my kids would think it was pretty cool too.” – Rose Manjarres, SVP, information technology for CBRE