Digital transformation is absolutely a people issue, on a number of levels.

First, it’s a culture shift within a lot of organizations to view IT as a business leader, as a facilitator, as a group of people helping to drive transformation, as opposed to seeing IT as the cable guys, so to speak. That’s transformational from a people perspective.

Second, you’ve got to have the right people in place for digital transformation. I’m fortunate that one of the things we did early on is put a cadre of people in place who were relationship managers, who own the relationship between IT and the business. Those people have credibility and relationships with the business, and they have personalities as well. So it’s not IT as “the pizza guys,” as we used to lovingly refer to it at a former company, by which we meant brilliant technologists who’d slide an IT "pizza" under the door because you couldn’t unleash them on the general public. You need business people who can act as relationship managers first. They just happen to be technologists and understand how to apply technology to solve business solutions. So that’s a people issue.

Third, it’s a people issue for me as a CIO. Instead of trying to take a command-and-control approach to this, I’m taking a collaborative one. I want people to view me as a partner helping them meet their objectives as opposed to trying to do a land grab and take ownership for something. It’s not about who owns it; it’s about how we collectively get there. And it’s an educational issue to help the C-suite understand that digital is not a discrete thing that you stand up somewhere in an organization. It’s a way of doing business where we all have to have skin in the game, and we all have to participate in that process. You can’t delegate it. You can’t outsource it. You have to be a part of that process to help us accomplish that digital transformation. So I think that’s a people issue, as well.

Finally, it’s a people issue ensuring you’re bringing the right people in to engage in digital transformation, and it’s a people issue because you’re also trying to reach out to a different set of constituents than most IT organizations have done in the past. Here at USTA we are we are taking a two-pronged approach to finding that ideal combination of attitude and aptitude: bringing in new talent from the outside and repurposing a team that already excels at what they do.

Existing talent may need to flex a new set of muscles, they may need to take the same competencies they have and use them in a slightly different way, but since our IT people already get it, it’s not about rewiring their brains. It’s just applying the same competencies to a different set of challenges and opportunities. Technology changes constantly anyway. In other words, I’m not worried about getting somebody who’s God’s gift to SQL; I’m worried about getting somebody who’s God’s gift to project management and process management and relationship management.

In the end, the technology is not easy per se, but it’s a lot less complex than the people. The technology either works or it doesn’t. And if it doesn’t, you fix it. The people stuff is the complicated stuff, especially when it comes to a transformation effort. 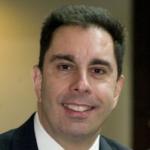 Larry Bonfante is the CIO of the United States Tennis Association and an executive coach at CIO Bench Coach. As an award-winning CIO, Bonfante's mission is to help develop world-class technology leaders and teams who enable their organizations to deliver outstanding business results.
More about me