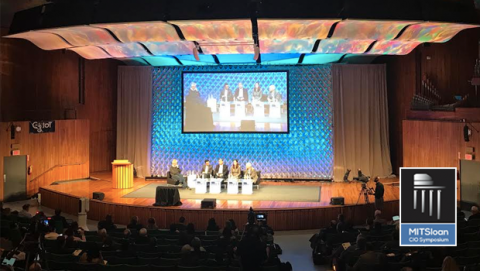 At the 2017 MIT Sloan CIO Symposium, “Uber-ization” reigned as the buzzword of the day. But this year, machine learning dominated discussions, as one attendee noted to us.

The conference, held May 24, featured wisdom from IT leaders making concrete progress disrupting their own organizations and achieving digital business goals – not just looking over their shoulders for the next Uber or Airbnb. Today, in lieu of our usual Friday news roundup, we bring you some intriguing lessons from the conference. Look for more advice from these trailblazing CIOs during the next few weeks.

Now let’s explore some candid advice from CIOs at the symposium on digital business transformation, IT culture change, cognitive technologies, and more.

1. Digital business IT leaders go all in on IT culture change.

“Don’t do digital lipstick,” says David Gledhill, group CIO at DBS, a leading bank in Asia. “Re-engineer to the core.” Gledhill, this year’s MIT Sloan CIO Leadership Award winner, helped his company set up a digital-only (no retail locations) bank in India, fueling the company’s growth outside of its traditional stronghold in Singapore. As the company embarked on its digital transformation, DBS decided to not hire outside digital experts, but instead, create a startup mentality inside, he said. To develop that startup mindset, Gledhill inserted “agitators” into teams to accelerate culture shift and eliminated leadership training in favor of hackathons to mash up young developers and senior banking executives to solve specific problems.

2. The IT organization as you knew it is morphing - quickly.

We are moving toward “a world where machines are going to tell people what to do,” instead of vice versa, says GE CIO Jim Fowler. That dynamic is thanks to rich data sets and powerful analysis tools.

At GE, the line between business hires and IT hires is blurring, he says. “More and more of our employees write code,” he says. GE’s new hires from the top schools for the past five years all code, he says – whether they’re in IT or not. That creates innovation in areas such as finance, he says.

He predicts that future teams will increasingly be self-forming, focused on particular business problems, cross-functional, and augmented by people who aren’t full-time employees.

3. Robots won’t steal all human jobs in the age of artificial intelligence – but big changes aren’t far off.

Automation experts Andrew McAfee and Erik Brynjolfsson, co-authors of “The Second Machine Age: Work, Progress, and Prosperity in a Time of Brilliant Technologies,” told the symposium audience that if anything, they have "underestimated" automation’s likely effects on the workforce. An explosion of data is fueling rapid advances in machine learning, Brynjolfsson notes. As a result, jobs involving pattern matching, such as pathologists, may experience severe disruption, he says. So will jobs involving physical labor, such as truck driving.

However, tasks that demand creativity, multi-step planning, and making interpersonal connections (such as coaching), remain hard for machines to do, Brynjolfsson notes. “There is no shortage of jobs only humans can do,” he says.

Another perspective: Cynthia Nustad, EVP and chief strategy officer (and former CIO) for Health Management Systems, notes that the “safest” people in her organization are those who have analytics skills and who are “pliable.” She estimates that 80 percent of her company’s employees will need to take on new job roles in the future, as tools such as automation and AI help the company transform. Other valuable skills in the age of automation, says Mona Vernon, VP at Thomson Reuters Labs, include storytelling and the ability to lead people through change.

4. CIOs can’t do cognitive technology themselves.

Don’t feel bad if your IT organization isn’t trailblazing the path to becoming a cognitive company. In fact, says Babson College professor and analytics expert Tom Davenport, most companies have not yet unleashed robotic process automation on customer service tasks. However, Davenport advises CIOs should prepare now to reap cognitive's potential, by building an ecosystem of partners: You’re likely not going to be able to hire the necessary talent and build all of the capabilities yourself, he says.

"That doesn’t mean turning everything over to one vendor," he adds. An ecosystem of partners can protect you from having to do that. One other tip: "Turn your analytics people into cognitive talent," he says. Start working now to turn your existing analytics experts into cognitive technology experts.

5. It’s not how much you spend on digital transformation, it’s how you spend it.

Almost every hand shot up when MIT Research Scientist Nils Fonstad asked the audience of CIOs to raise their hands if they were spending more on digital transformation today than three years ago. But when he asked CIOs whether they felt they were doing a good job of tracking results on digital transformation spending, nearly all the hands went down. Some good news: Fonstad’s research has found that the total amount organizations spend on digital innovation is not a competitive differentiator.

What separates top performers from low performers is their portfolios – how they allocate their total spend. The majority of the top performers focus on customer-facing efforts, such as new products and services or customer experience (50 percent), and business operations (30 percent). The research offers some hope for companies without huge digital transformation budgets.

6. After a hack or breach, CIOs must provide CEOs with context.

You’ve been hacked: Now what? That was the question posed by moderator Keri Pearlson, who leads MIT’s Interdisciplinary Consortium on Improving Cybersecurity Infrastructure. Attendees looking for a simple answer didn’t get one. The nature of the hack or the breach (yes, there’s a difference between the two, the panelists emphasized) will dictate the response. This can vary from fixing the problem to making the dreaded call to inform your CEO.  But don't rush: “When there’s a security breach, it’s important to have patience, willpower, and confidence in your program to not react too quickly,” says panelist James Lugabihl, director of execution assurance for ADP.

Then, you need to identify why you’ve been hacked, says Philips CISO Andrew Stanley. The why is crucial, he said, because when you brief senior leadership, they want full context around the intent, before informing law enforcement, customers, and/or regulators.

Laurie McLaughlin and Ginny Hamilton contributed to this report.