Taking your digital strategy from vision to execution requires great culture change. Get lessons learned from CIOs who are making progress 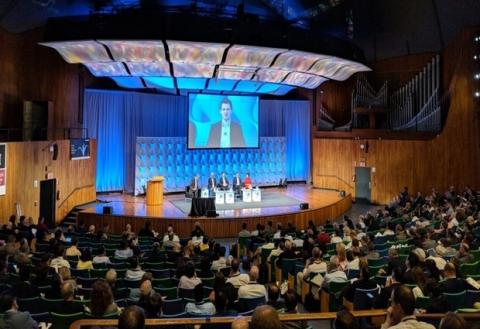 “Culture is what happens when the boss leaves the room.” MIT’s George Westerman drew pained chuckles from the 2018 MIT Sloan CIO Symposium audience as he shared this anonymous quote. CIOs at this week's conference – which focused on upping your digital game from strategy to execution – repeatedly agreed: Changing an organization’s culture is the hardest part of digital transformation.

What can you learn from the CIOs who are getting digital transformation – and the associated culture change – right? We’ve rounded up some of the best wisdom for IT leaders from this year’s symposium, which featured a diverse collection of CIOs from organizations ranging from banks to the United Nations.

David Gledhill, group CIO and head of group technology operations of Singapore-based DBS Bank, began using a quick, clever storytelling device to explain his company’s digital goal: "We wanted to be the 'd' in Gandalf" he says.

In other words, when you think of the likes of Google, Amazon, Netflix ... then he wants you to think of DBS. Gledhill, last year's MIT Sloan Symposium Leadership award winner, told the audience that this saying helped IT team members understand the bank’s vision and articulate it to others.

As Gledhill encouraged the team to make progress on goals like increasing software release cadence, he used discrete performance measurements for individual small teams, so that they could see measurable progress on change goals. Such measurements should also be easy to explain.

2. Adopting agile is part of culture change  – not a whole solution

The not-so-secret weapon to a successful digital transformation is having the right people with the right attitude. There still seems to be plenty of mystery, however, around how to build a culture that can get it done. And while adopting agile practices to help your organization move faster and test out new ideas can help, it's not a silver bullet. "You would be shocked to hear how many organizations believe capital 'A' 'Agile' is a full-blown culture solution," says Melissa Swift, Korn Ferry's global leader for digital solutions.

Agile is one piece of the puzzle, but two-week sprints and daily stand-ups are not going to be enough to create a digital culture. Likewise, a field trip to Silicon Valley or a single hackathon isn't enough either. If you really want to build a digital culture, you must be repeated and programmatic about it, she said. "We all talk about sprints, but we all have to think like marathoners," Swift said.

3. Bimodal gets in the way of culture change

Taking a bimodal approach won't get you as far as you need to go on culture change either, DBS Bank’s Gledhill said. "The minute you give the excuse that bimodal is OK, three-quarters of the organization is not going to change." It can help get you started though: "A two-track approach is a great right-now approach, but it's not a forever solution," Korn Ferry’s Swift said.

"Set a strategic vision, hire doers, and get out of the way," advised Andrei Oprisan, Director of Liberty Mutual's Boston tech hub and VP of technology. Above all else, if you want to create a digital culture, stop talking about it, and start doing it. When asked to summarize his digital culture change advice in one sentence, McKinsey & Company senior partner Tanguy Catlin advised: "Commit, start, and go."

4. You're probably not behind your peers on AI

One memorable moment: Michael Schrage, fellow at the MIT Initiative on the Digital Economy, used a live poll to ask audience members for the "Implementing AI" panel to share the words that best described their AI efforts to date. The first word that popped up on the screen? "Slow."

It was soon joined by "hype," "ethically challenged," and "woefully deficient." Panelists agreed that there are hard challenges to solve before you can take advantage of AI. For instance, Cynthia Stoddard, CIO of Adobe, pointed out that talent is often the toughest part. You have to hire people with the right level of curiosity who want to explore, she said. "A lot of people understand the potential of AI," she said, "but would they understand how to approach it and write algorithms for it? No." That's why training is key. In fact, DBS Bank's Gledhill said that he’s training the top 250 DBS executives to be AI conversant, meaning they are able to intelligently question the role of AI in the organization and determine when use cases are fitting or not. Both Stoddard and Gledhill agreed that data governance is also critical to AI success, as it increases speed to market with AI and provides consistency around business metrics and KPIs.

Giorgos Zacharia, CTO of KAYAK, said that he doesn’t have a dedicated KPI for machine learning because it’s measured the same way everything at KAYAK is measured: "Did we help the user find the flight or hotel they wanted?"

Zacharia said he’s happy to let any engineer experiment with AI, and about 20 percent of them do. For other companies who want to up-level their approach to AI, Stoddard has this straight-forward advice: "Pick a problem and let people go out and solve it. Give them the time and the resources to do so. It’s worked for us," she said.