How blockchain and the auto industry will fit together

Automakers, insurers, and related partners see a big role for blockchain. What will change in the realms of payments, insurance, security, and safety? 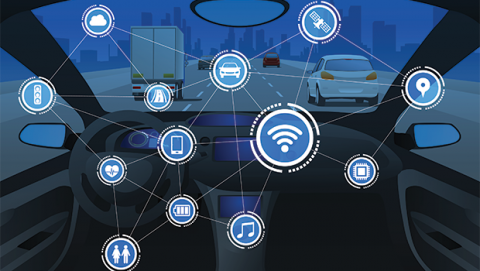 When it comes to cars and blockchain, no one has all the answers yet. But there is plenty to prepare for and think about – not only in the auto industry but also in related industries such as insurance.

First things first: While we have found interesting examples of blockchain in action, most companies and industries remain in an early stage of exploration and adoption. Anyone who tells you they’ve got it all figured out is exaggerating at best. Worse, they might be hawking blockchain snake oil.

“At this point, most of the specific potential uses for blockchain in various industries are quite speculative and a number of years out,” says Gordon Haff, technology evangelist at Red Hat. “What we can do, though, is think about the type of uses that play to blockchain strengths.”

It is plenty productive to explore sectors where, as Haff says, blockchain’s strong suits might be a good fit. The automotive industry quickly stands out. Some of its fundamental characteristics and concerns – think about the massive global supply chain, the complex web of licensing, taxation, and other regulations, and the important safety and trust issues – make it a fascinating candidate for blockchain-enabled innovation.

Haff points to the various entities that must communicate and transact with each other to keep cars on the road today – such as manufacturers, insurers, toll authorities, even (increasingly) the vehicles themselves – to spur some forward-looking thinking about how blockchain and the auto industry fit together. Keep in mind that is the short list of stakeholders, and you begin to see the potential here.

A new kind of car payment

“Payments might be made based on congestion charges or mileage,” Haff offers as an example of a blockchain-enabled automotive transaction. “This could be a case where the distributed trust model and smart contracts associated with blockchain are a fit.”

Factor in the sheer size of this sector (there were some 253 million passenger vehicles on the road in the U.S. alone back in 2014) and the evolving nature of transportation (think ride-sharing apps, self-driving vehicles, IoT and “smart” cars, and so on) and the possibilities grow.

We’re not likely to see an overnight blockchain revolution in the automotive industry. Haff points out that there will be headwinds fueled by a longstanding industry with entrenched players who may be reluctant to buy in; considerable government policy and regulatory issues; security and privacy concerns, and so forth.

“The automotive industry might be unique in the way that it combines many other platforms: entertainment, manufacturing, tracking of CO2 emissions, payments, and many others.”

However, one catalyst for change is that the auto industry is deeply connected with some other sectors where blockchain technology shows promise. Marta Piekarska, director of ecosystem at Hyperledger, points out several major ones: supply chain, insurance, and payments. And that’s not necessarily a comprehensive list. The vehicles we drive and ride in cross many more avenues than we may realize.

“The automotive industry might be unique in the way that it combines many other platforms: entertainment, manufacturing, tracking of CO2 emissions, payments, and many others,” she explains.

For Tim Kulp, director of emerging technologies at Mind Over Machines, there are two major categories of possible blockchain use cases in the automotive world: Making cars and using cars.

With the former, the intriguing uses are most visible in vehicle manufacturers’ global supply chain, and they carry significant implications for vehicle safety, vehicle recalls, and other important issues.

“Just like Walmart's supply chain for produce, car manufacturers can track the parts that go into their vehicle. Just like Walmart, manufacturers can use blockchain to provide transparency into their supply chain as well as track parts from assembly to dealership,” Kulp says. “Where Walmart is tracking contamination issues, automotive companies could track faulty parts to identify impacted vehicles instead of a general recall.”

This stuff isn’t all speculative, either.

“There are various blockchain applications that are already being built for the automotive industry,” says Yael Tamar, founder of the consulting firm Top of Blockchain.

Consider how we use cars, to borrow Kulp’s verb.

Tamar points to the multi-billion-dollar ride-hailing and ride-sharing industry; while the household names like Uber and Lyft function as central authorities over things like rides and payments, some upstarts are already trying to disrupt the disruptors with decentralized, blockchain-based versions of the popular services.

Automotive blockchain possibilities also stem from the industry’s intersection with other emergent trends and technologies. Tamar points to IoT and the increasing number of IoT devices and applications running in cars and other vehicles. She envisions “a wide-ranging field of IoT with data collection and processing capabilities on the blockchain for a variety of data points within the vehicle [then] applied to security, insurance, fuel efficiency, accident prevention, and much more.”

That speaks to an underlying truth once you lower the volume on blockchain buzz in favor of examining its practical uses in existing businesses and industries: The value may be greatest in looking for improvements in existing processes and business models rather than in the new-and-shiny scenarios.

“Looking at what members of Hyperledger are doing, I think there is a huge potential in applying blockchain as an enhancement to existing systems,” Piekarska says.

The example Red Hat’s Haff gave above – payments made based on traffic congestion or mileage – is already in play each time you hail a taxi or an Uber. But that scenario could be considerably widened in scope by blockchain.

Very interesting and well written article.
It is clearly written from an US point of view, which is understandable.
But the world is not America.
Inside China we are seeing a different model for the car industry, we are already seeing significant disruption. Try using money to pay for a taxi ride ? The entire country runs on QR codes and mobile payments, it is an incredible sight to see.
The real problem people have with technology is the pace of change.
Disruption by its very nature tends to come at you very quickly.

In China we have for example over 70 million active users in our automotive social marketplace (see www.iyutu.cn if you can read Chinese, or www.carlive.io if you want an english summary) and are moving these user onto increasingly block-chained based technologies and services. Within a couple of years we went from an idea to becoming the single largest social influencer in China on cars. Our next stage is to introduce alternative payment methods as a stepping stone to introduce new block-chained services, many of which mentioned in this article. You call it IOT, we call it IOV (Internet of Vehicles).
The pace has been so fast that it is only now the industry has noticed.
Any industry that can not or will not adapt will not survive, and with such potential to unlock huge value by applying these disruptive technologies we are going to see big changes occur inside China first then the US.

Alibaba's Ant Financial went from nothing to overtake JP Morgan in value in only a few years, and as of today 5 out of the 10 largest banks are Chinese.

The real question for the US is who is going to own these new business models ?
Will these new model be USA developed and owned or will all the technology be Chinese ?
Is the US going to lose yet another market sector to China ?