5 bad habits that steal your time at work

How to flip the script on your to-do list 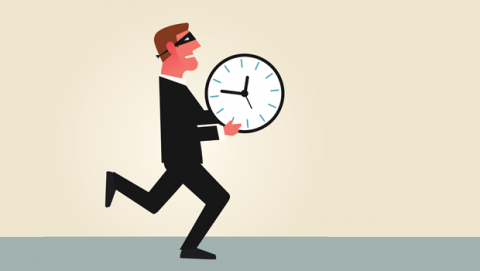 The new year is traditionally a time for letting go of that which no longer serves you – or perhaps never did. And, for the understandably harried leader, it can be the opportune time to try to free up more time in the calendar for the things that truly matter.

Thankfully, there are some relatively simple (though not always easy) changes leaders can make that can have an outsized impact on overall productivity and availability. The Enterprisers Project asked Laura Vanderkam, bestselling author of “Off the Clock: Feel Less Busy While Getting More Done” and “What the Most Successful People Do Before Breakfast,” for her tips on time-wasting habits that you should try to let go in 2019. Here's her advice on what to stop:

You know those meetings? The ones that don’t really accomplish a thing? Of course you do. They may have dominated your calendar since becoming an executive. Start pushing back on those. “The first question to ask in scheduling a meeting should not be, ‘Am I available’, it’s 'Why does this meeting need to happen?'” says Vanderkam. “If nothing will change in the world as a result of the meeting, it will likely be a waste of time.”

While you’re at it, start asking those same questions before calling a meeting for your team – they’ll appreciate the time back as well. (To make necessary meetings better, check out our article, “How to run meetings that hurt less”.)

[ Need more help reclaiming your calendar? Read also: 5 time thieves and how to beat them. ]

The impulse to check for and reply to incoming messages frequently throughout the day is understandable for leaders – after all, there may be a crisis or other urgent matter lurking in that inbox. However, email can be one of the biggest time wasters for an executive. Leaders can start to claim some of that time back by checking email less frequently and fighting the urge to reply to each one.

"Being constantly on email crowds out space for dreaming up the ideas that make you worth emailing in the first place."

“Chances are, the reason people are emailing you is that they want your thoughts on things. But being constantly on email crowds out space for dreaming up the ideas that make you worth emailing in the first place,” says Vanderkam. “Inbox Zero is vastly over-rated.”

You might want to steal an idea from productivity expert and author Chris Bailey who sends an auto-reply to all emails noting that he typically checks email once a day, at 3 p.m, offers a list of other email outlets for specific requests, and kindly lets the emailer know that he will reply soon. (For more on conquering the email time suck, take a peek at Productivity hacks: how to take control of your inbox.)

"Sleeping in short increments is the worst of all worlds.”

Oh, it’s tempting to want to get that ten more minutes of sleep in the morning: That’s why the snooze button was invented, after all. However, most sleep experts agree that this approach to easing out of bed does more harm than good, arguing that those in need of the snooze button would actually be better off setting the alarm an hour later and getting more rest.

In terms of productivity, it’s also an opportunity cost that’s mounting every morning of your working life. “Sleeping in short increments is the worst of all worlds,” Vanderkam says. “You’re not getting deep sleep, but you’re not waking up and doing anything either. Set your alarm for the time you actually intend to get out of bed and enjoy every last minute of sleep up until then.”

This may seem a bit out of scope for some IT leaders, but consider that the average American wastes 2.5 days a year looking for misplaced stuff – phones, wallets, keys, glasses (always check the top of your head). It gets even worse than losing that half a week. There are trickle-down effects; 60 percent of people have been late to work because of lost items, 49 percent have missed appointments or meetings, and 22 percent have missed planes, trains, or buses, according to the same study.

Leaders may be keen to try out new location-based tech solutions for this perennial problem. But there’s an analog fix as well. “Give anything you use frequently a home: shoes, keys, sunglasses, and coats by the door, phone in a charging station,” says Vanderkam. “Searching for lost items is a frustrating and pointless waste of time. Whenever you take an object out of its home, be sure to close the loop and return it.” Find spots for important items at work as well.

5. Deciding what to do first

This time waster may be the most counter-intuitive – taking some time at the start of each day to prioritize your to-do list. It may sound like a productivity enhancer, but Vanderkam says that for most folks, it’s a time- and energy-sapping exercise. “Most people have more energy, focus, and discipline in the mornings than at other points of the day (not everyone, but most people),” she says. “Spending the first bit of time at work figuring out your priorities for the day means you waste this valuable energy deciding rather than executing.”

Instead, flip the script. “Before you leave work for the day, figure out one thing you can make progress on the next morning,” Vanderkam advises. “When you show up, do this. Then dive into the firestorm of email, requests, meetings, or emergencies.” (Of course, apply the other advice above to rethink and limit the impact of meetings, emails, or other seemingly mandatory responsibilities.)

The only question now is, which time-wasting habit can you break first?