Ready to shake up your leadership style in 2020? These inspiring talks may improve your approach to motivating teams, nurturing creativity, and preparing the next generation of leaders 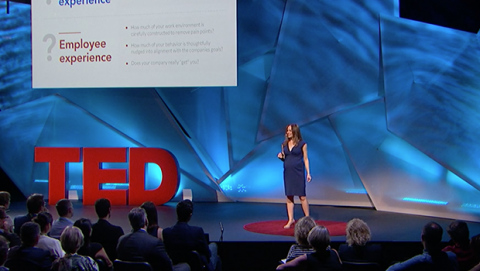 Leaders have learned that change is now the only constant: So as one decade comes to a close, it’s hard to predict what the future holds.  But you can stay open to new ideas and fresh perspectives that can help you – and your team – constantly improve and prepare for the unknown.

We’ve rounded up five TED Talks that offer wisdom and advice for leaders on rethinking their approach to managing people. Whether you want to spark more creativity, better understand and shape your culture, or set the next generation of leaders up for success, these talks provide insights that you can put into practice in 2020.

5 ways to lead in an era of constant change

Self-transformation is exciting, empowering, and energizing, but organizational transformation feels entirely different most of the time, points out Jim Hemerling in this talk. When people within an organization hear “transformation,” they may think "layoffs." It feels exhausting. And leaders often make things even harder by waiting too long to act. Leaders have to change the connotation of transformation in the workplace because, simply put, they can’t avoid it, says Hermerling. In this talk, he offers up five change management imperatives that put people first. These can help you make change meaningful to everyone and energize them for the future.

How to manage for collective creativity

Linda Hill and her team spent a decade studying exceptional leaders of innovation across 12 different industries and learned this important lesson: If leaders want to unlock great ideas time and time again, they must unlearn the conventional notions of leadership. Innovation is not about solo genius, it’s about collective genius, Hill says. This was highlighted by her time studying Ed Catmull, co-founder of Pixar, during the creation of the movie "Ratatouille." It takes 250 people four to five years to create one movie at Pixar: While you’d think they’d have a “too many cooks in the kitchen” problem, they prove successful time and time again, she says. Pixar and innovation communities across the globe have three qualities in common, which she shares in this talk.

Middle managers represent a pipeline of talent for your organization's future C-suite. But they may be learning outdated leadership habits from their predecessors that will be hard to break – and can hold the organization back in the long run. This happens when they learn from role models who are still leading in old-fashioned ways, says Elizabeth Lyle. When people try to impress the senior leaders in their organization, they act in a way that will get them promoted: Often, that means mirroring the existing leadership style, says Lyle. Instead, senior leaders need to do a better job helping middle managers develop good habits they will need to lead in the future. Every meeting to be led, every decision to be made, can be a practice run for middle managers, says Lyle. Organizations will only progress when middle managers have the space, freedom, and safety to figure out their own way – and leaders learn to let go.

We recognize unfairness at a very young age: It’s the root cause of polarization, and it’s bad for business, says Marco Alvera. In this talk, he shares his contrasting experiences working for a company that rewarded only high performers with bonuses and a company with fixed salaries and job security for all. He found that the latter was more innovative, and he believed fairness was the secret sauce. In a fair culture, people don’t have to worry about short-term results, or fear making mistakes, says Alvera. People are also more relaxed with each other because they aren’t in constant competition. A culture of fairness is supported by brain science and can work in any company, he says. It will inspire people to help others and bring their best to work every day. But it only takes one act of unfairness to start contaminating everyone. Watch this talk to learn how unfairness could be contaminating your own work culture – and specific tactics for fostering more fairness.

Companies spend a lot of time and money analyzing their customers and trying to shape their journey. Shockingly, they spend 1000 times less, on average, understanding and shaping the journey of their own employees, says Diana Dosik. They attempt to attract and engage employees with things like foosball tables and smoothie bars, but those efforts miss the mark when you can’t explain what employees do and why they do it, she says. In one example, Dosik explained how a company underscored the need for speed by offering a bonus to developers. In reality, the need for speed was at odds with the multitude of steps developers had to take to get to an approval, and going any faster would have meant damaging their own careers. The bonus for speed became a clear sign that the company didn’t understand their world. Businesses today already have an approach for understanding and shaping behaviors of their customers. It’s time to bring that approach to the workplace, she says.

Thank you Carla for this great selection !