5 takeaways for IT leaders from the MIT Sloan CIO Symposium

CIOs wish for simpler ways to wrangle data and experiment with business models – but change remains hard to scale. Also, it may be time to stop chasing “alignment” 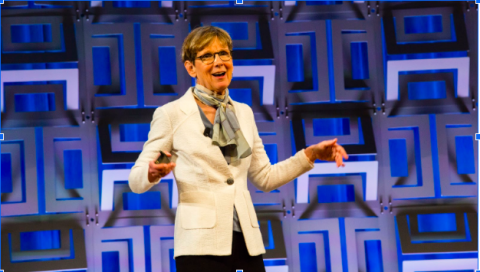 The MIT Sloan CIO Symposium tends to concentrate on areas where technology, IT organizations, and business value come together. This conference always has a good mix of academic researchers and IT leaders. Depending on the year, it’s sometimes more focused on the near-term impact of emerging technologies, and sometimes more on how more developed (but still relatively new) technologies can be more effectively used by organizations grappling with digital transformation.

This year was more of the latter. The day’s overarching theme, in the words of the conference organizers: “While many organizations have piloted insightful technologies, the challenge is to scale across the enterprise. Enterprises don’t really become smarter until they scale. Key hurdles are culture, processes, and a lack of talent.”

With that as context, here are five takeaways for IT leaders that caught my attention over the course of the day:

A panel discussion on “Crafting Data Strategies that Pay Off” highlighted that we’re in an environment where technology is looked to as a way of driving revenue – rather than just improving efficiency. Barbara Haley Wixom, principal research scientist, MIT Sloan Center for Information Systems Research, observed, “We’re great at cost-cutting with data, but 49% of data value comes from top-line returns.”

In general, no one was arguing against data being valuable. However, quite a few speakers and panelists described how extracting that value is challenging. For example, Mark Meyer, chief information officer, Tetra Pak Group, talked about how he would “come to a board meeting and everyone had a different version of the truth.” Mark Picone, vice president of Information & Data Services, Adobe, discussed the importance of coalescing data across the entire organization but went on to observe that while there was “general agreement about becoming data-driven, the ‘how’ was all over the board.”

Informing decisions and creating new revenue streams with data makes for a good high-level strategy. However, translating that strategy into revenue requires both a culture around using data and the execution to make it happen.

“What customers are willing to pay for changes constantly.”

“What customers are willing to pay for changes constantly,” said Ross. As a result, “success is being able to constantly change the strategy. Design trumps strategy.”

However, she observed, most established companies have not been designed to constantly change their strategy. Rather, companies are mostly designed to deliver today’s strategy efficiently. You need to “move from stability to agility.”

Ross also argued for the importance of just getting started, even if only with one empowered team. “You’d better start experimenting,” she said. “A lot of things look great, but you need to be aware of whether they’re real opportunities. You learn from success. You learn from hypotheses. Scale down to a single hypothesis.” (She prefers the hypothesis approach to the “learning from failure” concept. That’s because lacking a well-designed framework, an experiment might fail for any number of reasons, with the result that you don’t really know what not to do next time.)

[ Read also: Digital vs. digitized: Why CIOs must help companies do both, by Jeanne W. Ross. ]

The day saw a fair bit of discussion about how people within companies are responding to the changes associated with becoming more digital – as well as broader demographic shifts and expectations.

The luncheon table workplace discussion I led gravitated to the topic of remote work, which also came up in a “Future-proofing the Workforce for Digital” panel. If I had to sum up the discussion: It’s complicated.

There was general agreement that younger workers tend to value far more flexibility in workplace location and hours than the traditional 9-5 in-office regimen that we traditionally associate with corporate America. That probably won’t surprise anyone. However, it’s probably also not a surprise that there’s no single solution that works for every individual and every company, and compromises abound.

For example, time zones matter. For example, Amy deCastro, vice president of Human Resources, Secure Power Business, Schneider Electric, observed that it’s “really hard to have a daily standup if very distributed. As people move to a new program team, we try to reduce the amount of distribution.”

There’s also the challenge that, as Michael Han, chief technical officer and vice president, services, Liferay, put it: “[There’s] nothing easier than being able to walk into an office and go into a conference room with a whiteboard.” Communications technology has improved collaboration, but it hasn’t really enabled distributed meetings that are as effective as the in-person sort.

Over lunch, we also discussed how a lot of people don’t really want to be fully remote. At a minimum, they want opportunities to get together with team members face to face. For many, some sort of hybrid model may make sense, where members of a team work from home some days and get together with teammates on others. On the other hand, this still potentially constrains workers to a particular locale.

Peter Weill, chairman, MIT Sloan Center for Information Systems Research (CISR), shared a statistic that gives one pause. A recent MIT study of all the U.S.-listed boards of companies over $1 billion in revenue found that only 24 percent of boards were digitally savvy. Does that seem likely? An audience poll agreed. Most said that their companies weren’t digitally savvy either.

Companies that were digitally savvy had 38 percent higher revenue growth.

Which is a problem. The same study also found that companies that were digitally savvy had 38 percent higher revenue growth. Weill observed that this isn’t a matter of sticking a token tech expert on a board because one person will tend to be marginalized (and two will just talk to each other). Three digitally savvy directors are required to impact performance, according to Weill; the research didn’t find additional benefit from more than that. He also argued that an alternative “short-term strategy can be to have a tech committee, but not long-term.”

What do these digitally savvy directors bring to the board? Weill says, “They change the risk conversation from assessing the risk of a project to looking at the business risk of not doing something new.” A board must be able to ask the questions needed to determine the “right balance between weighing the risk of a current proposal versus the risk of not taking aggressive action.”

The MIT Sloan CIO Symposium has always kept its eye on the business impacts of technology. However, it’s becoming increasingly hard to even separate that business impact from IT strategy, because so many of the possibilities for growth, higher revenues, improved customer satisfaction, and more are enabled by technology. It was in this vein that Joe Peppard, principal research scientist, MIT Sloan Center for Information Systems Research, introduced the idea of co-evolution.

You can just think of this as alignment if you like. However, Peppard argued that co-evolution is more fitting now because it’s “related to thinking about organizations more as organisms and less like machines.”

Co-evolution means there’s not only alignment between IT and business, but also a more organic relationship to the business, customers, and a broader ecosystem. “Technology was historically an enabler. Now it’s a shaper,” Peppard said.

[ Is AI part of your digital plans? Get lessons learned from your peers in the new HBR Analytic Services report, An Executive's Guide to Real-World AI. ]