The pandemic has reshaped consumer behavior and team expectations. At a recent MIT Sloan CIO Symposium event, CIOs detailed what it means for organizations, IT, and the CIO role 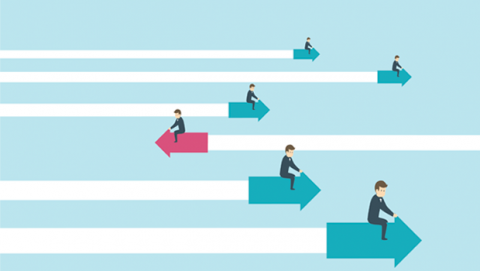 The speakers and panelists one hears from at events like this year’s MIT Sloan CIO Symposium series are not typical. They’re from companies somewhere on the leading edge of using technology to drive their business, or they’re academics and consultants who study such companies. But they do represent what’s possible with regard to digital transformation in a time of rapid change. And as evidenced at the most recent event, they shine a light on issues you can explore in your own organization.

1. Rapid change is the next normal. How rapid?

Barry Libenson, global CIO, Experian, said his company went from 2,000 VPN users to about 20,000 almost overnight. He estimates that it took about two weeks for everyone to get fully productive. Consumer behavior has also quickly shifted in many ways. Sandy Pentland, a professor at the MIT Media Lab, described how optimized automated systems in areas like supply chain management broke down when faced with rapid shifts in both demand and supply — a reality that just about everyone has faced on a personal level.

2. Some fast-moving consumer behavior changes will be permanent

No one was making confident predictions about long-term changes stemming from the pandemic. However, Rodney Zemmel, global leader, McKinsey Digital of McKinsey & Company, shared some suggestive data. On the consumer side, he says, “digital has been accelerating in just about all categories.” An important factor to watch will be the degree to which forced change — three out of four Americans tried a new shopping behavior, for example — will revert when possible, post today’s emphasis on stay-in-place.

The biggest shifts were around food: Think home cooking and online grocery shopping.

Here, McKinsey found a spectrum of possible outcomes. It’s not really a surprise that most people see remote learning, and probably telemedicine too, as necessary evils. On the other hand, Zemmel says the data shows that the accelerated shift towards streaming and online fitness is likely to stay permanently.

But the biggest shifts were around food. Both home cooking and online grocery shopping — a category that has been generally resistant to getting moved online — will probably stay more popular with consumers than in the past. Cashless transactions are also gaining steam.

Mark Anderson, senior director of solution architecture, Equinix, described this year as “a forced test of many things we had thought about but not tried.” For example, he observed, “Many supply chains are not well understood and underpinned with paper. We’ve started looking at technologies like blockchain and IoT.”

Similar dynamics are pervasive. For example, Zemmel says that McKinsey’s data shows that B2B remote selling is working: “It’s easier to schedule, more efficient than in-person, [and leads to] faster buying behavior.” No one expects in-person selling to go away, but it may be a smaller part of the mix than before.

As is the case at many companies, Anderson speculates that looking forward, employees may not commute all the time. Also, even when industry events go back to in-person, it’s widely expected that many will have at least a hybrid virtual component.

Prior to this year, there was skepticism in some circles about the value of digitization and digital transformation; Zemmel calls December 2019 “peak cynicism about digitization.” But, he adds, “COVID accelerated the migration to digital.”

Zemmel says that the evolution of the role of the CIO has been accelerated as well. He sees CIOs increasingly reporting to the CEO because they increasingly have a dual mandate. In addition to their historical operational role running the IT department, they now are also customer-facing and driving revenue. That mandate is not new for forward-looking IT organizations, but the pandemic has made other organizations hyper-aware of IT’s role in driving change quickly. CIOs are becoming a sort of “chief influencing officer who is breaking down silos and driving adoption of digital products,” Zemmel adds.

Experian’s Libenson puts it this way: “The pandemic has forced us to be closer to the business than before. We had a seat at the table before. But I think we will be a better organization after this.”

5. A renewed focus on data and people

The various panelists gave nods to the role of technology, especially the use of data; Zemmel describes the second generation of B2B digital selling as “capturing the ‘digital exhaust’ to drive new analytic insights and using data to drive performance and create more immersive experiences.”

Libenson also emphasized that it’s not about just continuing to do things in the same way. “It’s not a case of doing what you’re doing in a different way. You have to adapt with new processes, new tools,” he said.

However, a lot of the IT leader’s focus right now is on people. Zemmel identified talent — especially retraining and redirecting the existing workforce as needed — as one of the keys to delivering digital transformation. And even the use of data has a human side. While data management is another important element of digital transformation, according to Zemmel, he argues that “it’s often more of an organizational challenge than a technical one.”

Says Aarti Shah, senior vice president, chief information & digital officer, Eli Lilly and Company, “People will always be the foundation that we stand on.” She also emphasized the importance of virtual check-ins and ensuring people are taking time off. Libenson adds, “We have had more virtual happy hours in the past six months than in the prior six years. People are trying to find a silver lining.”