Hybrid work by the numbers: 14 stats to see

Is there a disconnect between leaders and teams on hybrid work? Let's examine 14 statistics (and then some) that speak to the state of hybrid work models – combining office and remote work - and what's next 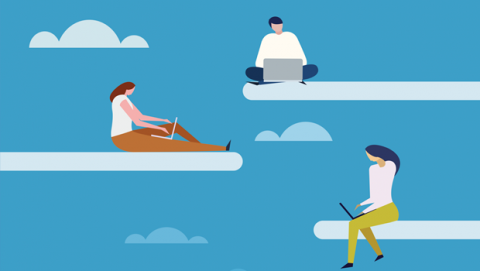 By at least one measure, people are returning – or planning to return – to the traditional office in 2021. A Deloitte survey of 275 executives conducted in April found that more than two-thirds of respondents (67 percent) were still fully remote at the time. But 64 percent expected their organization to return to the office at some point in 2021, and another 25 percent said they’d already reopened.

In spite of some high-flying predictions – and high-profile company announcements – about long-term shifts to working from home, just two percent of the executives in the Deloitte survey said their organizations would remain permanently remote.

The phrase “return to the office” does not adequately capture the many nuances of what this will actually entail. Enter the hybrid workplace, an inherently flexible model that typically fits one of two general frameworks:

Hybrid work models may represent the best path forward for companies that realize that "return to the office" is not synonymous with "return to pre-pandemic normal."

There are increasingly visible reasons that hybrid work is a hot topic. For one, many employers and employees rate their experience with remote work positively – not only did they do it, but they did it well. There’s also a recognition that at least a partial return to the office offers upsides that are difficult or impossible to achieve remotely. Hybrid rolls up the benefits of both approaches.

Most organizations and the executives that lead them are also recognizing the need to maximize future flexibility. The pandemic hasn’t actually ended and plenty of uncertainty remains. Hybrid models may represent the best path forward for companies that realize that “return to the office” is not synonymous with “return to pre-pandemic normal.”

Here’s one more reason hybrid work models may get long-term traction: There appears to be a gap between employer expectations and employee preferences about the future of work.

A bevy of new and recent research and industry surveys speaks to this and related trends. Let’s dig into 14 stats (and then some) that speak to the rise of hybrid working models in 2021 and beyond – and what they may portend for the future.

20 percent: One in five employed U.S. adults whose jobs could be mostly or entirely performed outside of the office worked from home prior to the pandemic, according to Pew Research.

71 percent: That jumped to more than seven out of 10 people in that same Pew Research group (employed adults in the U.S. who said their jobs can be done remotely) during the pandemic.

54 percent: More than half (54 percent) of that Pew Research respondent group said they’d like to continue working from home after the pandemic ends.

Is hybrid work not just OK but optimal?

83 percent: The overwhelming majority of more than 9,000 workers included in a recent Accenture survey on the future of work said they felt a hybrid work model would be optimal going forward. That’s indicative of widespread sentiment among office workers that the days of daily commutes and 40-plus hours a week in the traditional office may be waning.

25 percent: Much of the hubbub about remote and hybrid work models tends to overlook the reality that some jobs simply can’t be done remotely. One in four (25 percent) of respondents in Accenture’s report worked on-site throughout the pandemic and expect to continue doing so in the future, regardless of their preferred work model. Accenture notes that these people tend to be clustered in industries like healthcare and retail – and that this reveals a need to reimagine what on-site work looks like as well, not just hybrid and remote work models.

[ How can leaders shape an equitable hybrid work experience for all? Read also: Hybrid work: 4 best practices for fairness. ]

The C-suite disconnect on hybrid work

5 percent: Here’s a good indicator as to why hybrid is a hot topic: In a PwC survey of executives and rank-and-file employees conducted in January 2021, most respondents (83 percent) rated their organization’s pivot to remote work as a success. But just five percent of the executives included in the survey sample thought their company culture would survive a permanent shift to fully remote operations.

In this light, you can view the hybrid workplace as an attempt to have the best of both remote and on-site operations. Among other things, a hybrid workplace recognizes that while on-site might be ideal for some employees, remote work – at least some of the time – might better suit others in the organization.

62 percent: Nearly two-thirds of those same executives (62 percent) felt that their organizations would need between two and four days a week in the office to maintain a strong company culture.

Interestingly, 21 percent said their organization would need to be in the office five days a week to maintain a strong culture. That’s potentially an indicator of a brewing conflict between the C suite and the broader workforce about the future of work.

0: There is zero consensus among the respondents in the PwC survey on the optimal number of days in the office in a hybrid work model. While three days a week was the leader at 29 percent, there is a relatively even distribution across the spectrum of execs who think several days a month will suffice to those who believe that a return to the conventional five-day workweek is a must, and everything in between.

32 percent: Deloitte’s Return to Workplaces survey found that “maintaining culture” was the top employer concern as they develop their onsite/remote/hybrid office strategies for 2021 and beyond. That was followed by maintaining high performance (26 percent), collaborating effectively (19 percent), maintaining fairness (13 percent), and employees not wanting to return in person (10 percent).

The percentage difference between culture and issues such as fairness and employee preferences also suggests a gap between organizational and individual interests – one worth keeping tabs on in your own company.

75 percent vs. 61 percent: Here’s another sign of a potential conflict between employee and employer expectations. PwC found that 75 percent of the executives it surveyed expected that at least half of their office-based employees will be working on-site by July 2021. But 61 percent of non-executive employees said they expected to be working in the office at least half of the time by July. In other words, employees appear to expect a slower return to the office than their employers are actually planning.

78 percent: The apparent preference among many people for long-term hybrid and/or remote work is not merely a matter of preference – it’s also about productivity. 78 percent of the roughly 2,000 workers surveyed by The Harris Poll on behalf of Sungard AS said they believe they would be more productive if they could choose to work on-site or remotely as needed. 41 percent said they strongly agree with that statement.

What people will give up for remote or hybrid work

56 percent: What are people willing to give up in exchange for long-term flexibility? Quite a lot, apparently: 56 percent of people in the Sungard AS survey said they would take less money for the ability to work from any location.

65 percent: This begs another important question: How much less? Insurance company Breeze asked 1,000 U.S. workers this and similar questions about what they’d be willing to forgo in exchange for a long-term remote position. It found 65 percent of the survey group would take a five percent pay cut in order to stay fully remote.

Unsurprisingly, the percentage of people willing to accept reduced pay for a fully remote position quickly dwindles as the size of the pay cut grows. But it doesn’t vanish – nearly one in four (24%) of respondents said they’d take a 15 percent pay reduction to continue working remotely.

51 percent: While the pull of remote work remains strong for many people, the best-of-both-worlds appeal of hybrid models may be growing. The Harris Poll/Sungard AS survey found that while 43 percent of people would ideally prefer to not return to the office at all, 51 percent would choose a mix of remote and on-site work.