4 takeaways for CIOs from the MIT Sloan CIO Symposium

IT leaders from a range of industries offer perspectives on security, the IT talent shortage, and more 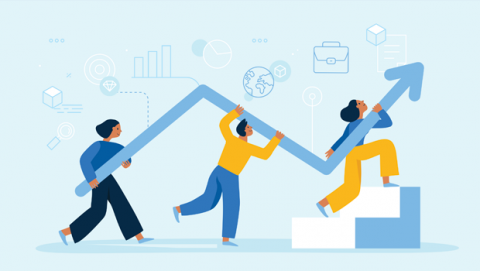 Last week saw a return to a partly in-person MIT Sloan CIO Symposium event. As usual, there was a wealth of insights from senior IT leaders – some related to ongoing trends, others to new or at least accelerated ones.

Here are four discussions that jumped out from the mostly panel-oriented format.

1. How to become cyber-resilient

There’s been plenty of discussion over the past few years about preventing cyber attacks. But that framing might be wrong, or at least too narrow. Prof. Stuart Madnick, Co-founder, Cybersecurity at MIT Sloan (CAMS), went so far as to say that “prevention is futile,” given, for example, that supply chain attacks such as Log4j are “zero-click vulnerabilities.” (That’s not to say that security scans and other processes can’t reduce the number of vulnerabilities, but you shouldn’t expect to catch them all.)

Esmond Kane, Chief Information Security Officer (CISO), Steward Health Care, emphasized the importance of planning. “The core concept around resilience is preparing,” he said, adding, “No plan is going to survive first contact.” But planning for and thinking through possible attacks and response procedures is useful, even if you may eventually need to adjust on the fly.

Kane also emphasized that people are the weakest link, even if they’re not deliberately doing anything malicious. He found this a weakness of the Executive Order on Improving the Nation’s Cybersecurity because it “didn’t include any real focus on security education.”

People, or rather the lack of them, were the subject of another panel. This is hardly surprising; skills and/or talent shortages are listed as barriers in many surveys we conduct at Red Hat, like the 2022 Global Tech Outlook. But what can be done about it? The main challenge the panelists noted was not so much “The Great Resignation,” as it’s come to be called, but rather the need for new skills to deal with technologies such as machine learning, cloud, and containers.

The panel emphasized two points in particular: The first was widening the talent pool they draw from. For example, Melissa Swift, US&C Transformation Solutions Leader, Mercer, noted that “60% of jobs in the U.S. require a degree … and 60% shouldn’t.”

Panelists also pointed out that companies tend to neglect continuing education, even at the level of lightweight certificates or badges for learning a new technology or product. And training budgets are often the first thing to go in a downturn. However, there was broad agreement that even though job mobility can make it harder to justify educational investments, it’s something that companies need to do, as opposed to hiring an outside person with the exact right qualifications for an open position.

[ Learn how CIOs are speeding toward goals while preventing employee burnout in this report from Harvard Business Review Analytic Services: Maintaining Momentum on Digital Transformation ]

3. The challenges and opportunities of cloud

It’s been interesting over time to see cloud discussions evolve at the MIT Sloan CIO Symposium and elsewhere. Subhadaa Reddimasi, SVP, Head of Application Modernization & Cloud Adoption, Wells Fargo Bank, commented that “cloud, six or seven years ago, was all about cost.” Now it’s more about “the ability and scale to deliver experiences to the customer.” This mirrors the results we’ve seen in surveys such as The State of Enterprise Open Source 2022.

And rather than a bottoms-up IT or developer-led initiative, cloud is more strategic today. Steve Van Kuiken, Senior Partner, McKinsey & Company, said, “Most value will be gained through innovations and innovation-driven growth.”

However, the strategic nature of hybrid cloud environments has various implications. Reddimasi emphasizes that you “should think about strategy up-front.” It also means that cloud is no longer just an IT project that’s loosely connected to the rest of the business.

CIOs need to help the CEO and board understand cloud and its potential. CIOs implicitly assume a level of understanding that CEOs may not have.’

From Kuiken’s perspective, “The main reason cloud transformations fail is that they don’t have CEO or board support.” They see cloud as a technology problem to be solved by IT. CIOs “need to help the CEO and board understand cloud and its potential. CIOs implicitly assume a level of understanding that CEOs may not have.” And, he adds, the discussion may not be framed in terms CEOs can understand.

This is a common theme that has been explored at past symposiums – the need for the CIO to increasingly be a partner to the CEO. It also emphasizes the increasing importance of boards to have technology expertise.

Panelists were generally bullish on or at least interested in not only AI/ML but also more emerging trends such as the Metaverse, blockchain, and quantum computing.

For Manoj Kumbhat, Global Chief Information Officer, Kimberly-Clark, it’s about “digitally engaging with consumers in a personalized way.” He’s also interested in quantum as a way to “drive manufacturing efficiency and reduce waste.”

However, there are barriers. Here again, skills are one of them. Suneet Dua, Products & Technology Chief Growth Officer, PwC US, observed that we’re “not moving human skills training fast enough. The digital divide is a real problem.” He also noted that there is still a lot of process friction in corporations. And while CIOs are talking about this, only about 25 percent have done something about it.