Agile: Starting at the top

When the team at Thales North America decided to adopt agile methodologies, they started with leadership. Consider these lessons learned from those who’ve been there, done that 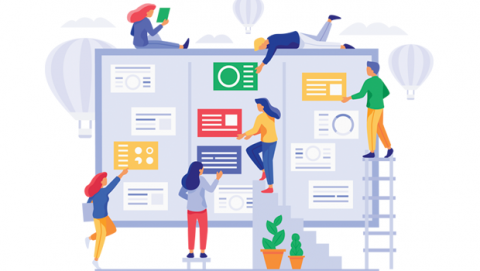 Change management can be the hardest part of any transformation. While you may quickly get people on board with the idea of change, it can be a long time before behaviors start to shift. We are all creatures of habit, after all.

When the IT organization at Thales North America wanted to transform product and service delivery from waterfall to agile, they took a radical approach: Instead of simply talking about what they wanted to achieve – squads, operating using agile methods driven by user stories, and ultimately delivering incremental value – they decided to show the organization by walking the walk themselves.

“The only way we could truly be effective in leading the organization through an agile transformation is if we transformed our leadership team first,” says Kevin Neifert, CIO of Thales North America.

Neifert, who had previous experience working with agile methodologies, was confident this would be an effective first step in Thales North America's agile transformation. The leadership team, however, had a few doubts.

“If you asked me a year ago, I would have said there’s no way this would work,” says Eric Liebowitz, Thales North America Chief Information Security Officer. “I’ve been in IT for almost 20 years, and a majority of the support functions that I’ve been in are very reactive. I didn’t see how agile would work in a very reactive type of mindset.”

Even those on the leadership team who had positive prior experiences on agile teams were skeptical in the beginning. “While agile works for software development teams, the products of leadership teams are completely different,” says Malik Umar, Thales VP for ISIT Strategy, Architecture and Technology in North America.

Both Umar and Liebowitz now say they were proven wrong – and that it didn’t take long for them to see the light.

Thales North America planned to work in month-long agile sprints, and according to Umar, by sprint three, he was a believer.

“In the third sprint, we were estimating the effort that was needed by each one of us. The number of hours of leadership work required was more than the hours in a day,” Umar explains. “When the team saw that during our stand-up, everyone rallied to pitch in. In the end, we got it all done, and it wasn’t all reliant on me. That was the ‘aha’ moment that changed my view on agile.”

Liebowitz says he realized that IT is not as reactive as he originally thought. “Planning work the agile way, you become better at predicting what needs to be done before you even get started. We were consistently able to accomplish more than I thought we could in each sprint,” he says.

"Planning work the agile way, you become better at predicting what needs to be done before you even get started."

Having strong support was key to this change in beliefs among the leadership team. Aisha Mir, IT Agile Operations Director for Thales North America, has a track record of successful agile transformations under her belt and was eager to help the leadership team overcome any initial hurdles.

“The best thing I saw out of previous transformations I’ve been a part of was the way that the team started working together and the way they were empowered. I really wanted that for our team,” says Mir. “In those first few sprints, we saw that there were ways for all of us to help each other, and that’s when the rest of the team began believing. I had seen that happen before – where the team really becomes one unit and they see what tasks are in front of them – and they scrum together to finish it.”

While the support was essential, one motivating factor helped them work through any challenge in their way: How could they ask other parts of the IT organization to adopt agile methodologies if they couldn’t do it themselves?

“When we started, we all had some level of skepticism but were willing to try it because we knew this was going to be the life our organization was going to live,” says Daniel Baldwin, Director, Support and Collaboration Solutions, Thales North America. “We recognized that there would be inherent value in us going first because it would allow us to run into the challenges and answer questions that our teams would eventually run into. In the end, we were pretty enthusiastic about it.”

The Thales North America leadership team is now one year into its agile transformation, and the lessons they’ve learned along the way are helping as they coach other areas of IT. One key takeaway for Derek Kamp, Director, IT Infrastructure, is that agile is not an all-or-nothing proposition.

“I wish that I had known that it was not going to be such a radical transformation,” says Kamp. “We evolved into it slowly and welcomed the structure of sprints and stand-up meetings, which we didn’t have before. Regular communication also helped make things easier.”

A slow start doesn’t mean that agile isn’t working or that people aren’t on board. Yet without the direct experience of adopting agile themselves, early confusion and missteps may have been seen as failure.

"Being able to coach our teams practically rather than theoretically was a huge advantage."

“I’ve got four squads under me now and as they started deploying the agile principles, it wasn’t me theoretically proposing to try this or try that. I was actually able to say, ‘I’ve seen this before. Here’s how we fixed that. Try this and you’ll see that it works.’ Being able to coach our teams practically rather than theoretically was a huge advantage,” says Kamp.

Going through transformation first also gave everyone in the leadership team a perspective of empathy, notes Umar. That empathy extended to other teams getting started on their journey and helped the leadership team hone in on the value IT brought to the business.

“The first agile practice that we adopted across the board was the user story, where we put on a hat from the user perspective. The empathy piece came quickly in all directions and all ways,” says Mir. “It helped us see what we were trying to do for the business in a new light. It really started us on the path of connecting with the users and the business that we’re trying to deliver value to.”

Overcoming barriers on the path to agile success

For IT leadership teams who have tried agile in the past with limited success, or those who are facing roadblocks in their journey, the Thales North America leadership team offers this advice:

Planning to implement an agile strategy? Consider these real-world lessons from an IT leadership...