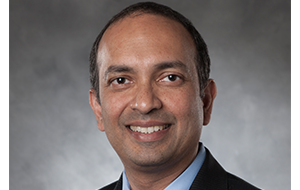 Ravi Naik is SanDisk’s senior vice president and chief information officer, responsible for company’s worldwide IT infrastructure, including computer and telephony systems, global applications, network security and help desk administration. In this role, Naik has created an IT organization that is deeply engaged across the business, working to define and implement the system architecture and capabilities needed to efficiently run the company. Under his purview, the IT team manages two datacenters, multiple server rooms and the technology needs of more than 5,000 employees around the world, both in the office and on the road including an IT “help desk” team in Israel that supports employees 24 hours a day/365 days a year. In addition to leading the IT management of the company, Naik oversees SanDisk’s worldwide facility operations and the management of nearly 20 locations worldwide. The shared oversight of both IT and facility organizations has brought a new level of collaboration and alignment between the two operations — resulting in significant benefits and efficiencies for the company.

Prior to SanDisk, Naik served as enterprise resource planning (ERP) program director at Mercury Interactive. Upon Mercury’s acquisition by HP, he headed the Mercury-HP IT integration as part of the HP Enterprise Business integration leadership team. At 3Com Corporation he held various positions, including programmer, development manager and IT ERP manager.

Naik holds a bachelor’s degree in electrical engineering from the University of Mumbai.

SanDisk CIO Ravi Naik doesn’t just oversee IT operations, he is also the head of real estate and...