IT leaders took a deep dive into the much-hyped topic of AI at MIT Sloan CIO Symposium 2018. Consider these four takeaways 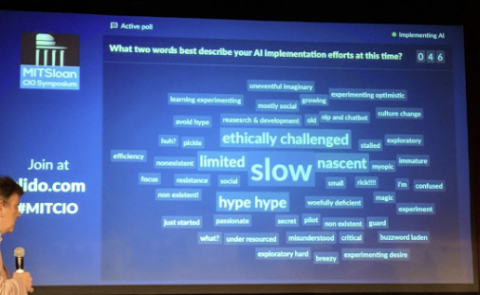 When asked to describe their artificial intelligence efforts to date, many IT leaders attending the MIT Sloan CIO Symposium used two words:  "slow" and “hype.” As that exercise illustrates, many CIOs are still struggling to cut through the noise and better understand how AI and machine learning will impact their businesses moving forward.

Are robots coming to take our jobs? Are we going to fall exponentially behind our competitors if we can’t hire the best data scientists to deal with AI? The speakers on stage had some answers to these and other pressing questions around AI. We rounded up four takeaways you can use, as well as a few tweets around the conference's AI discussions.  What AI lessons did you learn? Tell us in the comments.

The work of the future will include humans

We crossed an important threshold in AI when machines got better at recognizing images than humans could, Erik Brynjolfsson, director of the MIT Initiative on the Digital Economy, pointed out. However, Artificial General Intelligence (AGI), where the majority of jobs done by humans will be replaced by machines, is still a far off prospect, he says. Elisabeth Reynolds, executive director of the Work of the Future Task Force added to this sentiment by pointing out the distinction her team makes to call it the Work of the Future rather than the Future of Work. That’s to emphasize that there will be work for humans in the future, she said. Only 5 percent of jobs will be displaced by machines, her research says.

In most cases, #machinelearning can do some tasks better than humans in a given occupation, but not all. The future of work will involve humans and #AI working together. -@erikbryn #MITCIO

However, Brynjolfsson’s panel on AI didn’t shy away from the fact that some jobs will absolutely change as AI becomes more prevalent. They discussed the precarious nature of jobs that require only one or a few skills, like truck driving, for instance. “As a CIO, you need to look at the skills sets that allow for flexibility,” suggested Reynolds on the topic of hiring for adaptability. The panel also noted that since jobs will change, CIOs should provide their workforce with lifelong learning opportunities. Cythina Stoddard, CIO of Adobe, called the talent issue the hardest part of AI. She said, “You have to hire people with the right level of curiosity who want to explore.” By the way, if you're looking for a job that robots will not do, Brynjolfsson says the most secure role is massage therapist.

Despite the big changes AI will bring to the enterprise and to individual jobs, many of the speakers on stage at MIT Sloan CIO Symposium regard it simply as “just another tool in the toolkit.” David Gledhill, group CIO and head of group technology and operations for DBS Bank, said that AI has an “aura of complexity” around it but, “much of it is not that hard.” And, like any tool, a big part of demystifying AI will be in training people to understand what it can and can’t do.

Stoddard underscored this point, saying, “A lot of people understand the potential of AI, but would they understand how to approach it and write algorithms for it? No.” On another panel, Stephen Taylor, global head of analytics, reporting, integration, and software engineering for Devon Energy Corporation further made the case for training versus hiring for AI skills. He said it’s been easier and he’s had better luck teaching business acumen to computer scientists than hiring data scientists from the outside to handle the influx of data from AI.

I expect we'll be hearing a lot more about multi-modal AI in the context of effective and cost-efficient digital transformation programs. #DX #MITCIO https://t.co/BvcxVLZ599

Strive to use AI to improve customer experience

Speakers also examined the human experience on the other side of AI – the end customer's. Hugh Owen, senior vice president of product marketing for MicroStrategy shared his view of what makes an intelligent enterprise: One in which every person is armed with information – whether it’s AI-driven or not – to execute on strategies more effectively and do their jobs better because of access to that information. The pervasiveness of information coming from AI and machine learning is the difference today.

Owen gave an example of one such intelligent enterprise, Boston Children’s Hospital, which he described as having a capacity issue. The hospital used machine learning to predict, better than humans could, whether someone coming into the ER will need a bed and approximately how long they will need it, said Owen. Access to that key piece of information is significantly improving the experience of people who come into the ER. If you want to build an intelligent enterprise, make sure the thing the customer sees is beautiful, easy, and enjoyable to use – humans still need to touch these things, Owen pointed out. AI is making it easier to improve that end user experience.