Considering open source alternatives to the likes of Skype and Zoom for online meetings? Here's a look at some options – and factors to remember 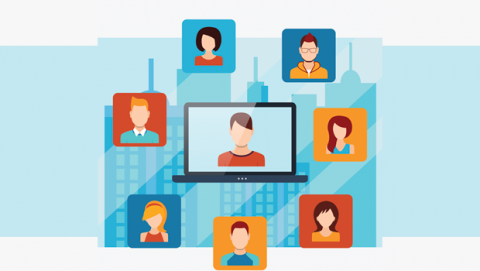 The current explosion in remote and distributed work has focused a lot of attention on the capabilities of online video meetings platforms like Zoom or the one built into Microsoft Teams, as well as on the challenges of managing online meetings.

Open source alternatives could offer advantages in terms of cost, customization, and control.

That also makes this a good time to look at the open source alternatives with advantages in terms of cost, customization, and control, as well as the tradeoffs that come with them.

Jitsi would rate as the most direct rival to Zoom, given that it supports similar sorts of online meetings and small webinars. The free Jitsi Meet cloud service is backed by the unified communications company 8x8, which also offers paid plans, but the code is available for you to install on your own servers. Because it uses the WebRTC protocol, Jitsi does not require a client download. It currently works best in the Chrome browser (with active efforts underway to improve how it works with Firefox) or via mobile apps for Android and iOS.

In contrast, Jami is peer-to-peer text and video chat software for computers and phones, available as a free download. While it won’t replace the communication and collaboration you would do in Zoom or Jitsi, it could be an alternative for the kind of communication and collaboration associated with Skype or Microsoft Teams — chat with the option to transition to a call when necessary. Jami was created by Savoir-faire Linux of Montreal, which plans to make money selling Jami Account Management Server, an administrative tool.

Signal, the high-security messaging app, supports video calling, but so far only from mobile devices. Wire and Wickr are a couple of other open source options in this category.

Here are some factors you might consider in researching open source meeting tool options:

Many of the open source projects focused on video collaboration, and collaboration in general, have made improved security one of their primary goals. Make that security and control. While plenty of organizations have decided that the security of cloud-based collaboration software is good enough for their purposes, others dislike the idea of communications passing through a server not under their direct control.

The Jami project (previously known as Ring) started with a request from a Canadian federal agency seeking military-grade security for video communications that wouldn’t depend on a centralized server, according to Michael Elkouby, vice president of sales and business development for Savoir-faire Linux. That agency has not put the system into production, but Jami has also attracted interest from a hospital group in Virginia that is piloting it, he says. Many of the early active users are law firms and healthcare organizations with security or regulatory concerns.

One nursing home whose patients are currently unable to have visitors has loaded Jami onto iPads to support communication with loved ones.

With more people doing remote work, Jami is seeing 500 to 3,000 downloads a day, with an average retention rate of 45 percent, Elkouby says. One nursing home whose patients are currently unable to have visitors has loaded the software onto iPads to support communication with loved ones. In that case, the advantage was not so much security as privacy, he says. “No email is required, no personal information at all is required, to create an account.”

Unlike Jami, Jitsi does have a server in the middle handling the task of mixing video streams. However, that server can be your server in your data center if you don’t want the version hosted by 8x8.

“There is reason to believe people get better security from us from the beginning because of the open source nature – you know what you’re getting,” says Emil Ivov, founder of the Jitsi product and head of video collaboration at 8x8. “Everything we do is out there, and people audit us all the time.”

Jitsi has also demonstrated an end-to-end encryption capability, which it hopes to put into production soon. That would give it an edge on Zoom and other cloud collaboration services that don’t support end-to-end encryption of voice and video call streams. With Zoom, video streams are decrypted when they pass through Zoom’s servers and encrypted again for transmission to other users.

In Jitsi’s version of call encryption, each participant joining the call would have to enter a security key to decrypt the stream, but they wouldn’t have to share it with the Jitsi server. The encryption is based on the Double Ratchet algorithm originally created by the developers of Signal, which has been adopted for use in a number of other open source communication products.

Jitsi users who want end-to-end encryption will have the option of sharing the key “out of band,” through some mechanism the host server wouldn’t have access to. Coming up with a simple user interface to help users through that process is one of the things the Jitsi developers are still working on, Ivov says.

2. Consider if you want a communication and collaboration tech stack vs. a meeting tool alone

The Riot team messaging client and Matrix collaboration server system are mentioned in our sister site Opensource.com's roundup of Skype alternatives; this solution turns out to use integration with Jitsi for online video meetings. Jitsi is also the default video meeting option for Rocket Chat, another open source team chat collaboration tool.

In the broader battle of the tech stacks, all these products are also competitors. That is, 8x8 is using Jitsi to entice users into trying its suite of unified communication and collaboration tools. The companies behind Riot and Rocket Chat both have done work on their own video collaboration tech.

Other open source team chat/workstream collaboration platforms like Mattermost and Zulip follow a plugin strategy, supporting integrations with both Zoom and Jitsi.

Unification of multiple modes of communication and collaboration is a strong trend in enterprise tech, although there is still room for best-of-breed players like Slack (which offers its own video meeting software but hasn’t seen widespread adoption of it).

Some organizations prefer a suite of software that plays nicely together, even if it’s not all from the same developer. For other organizations, that’s not as big a factor.

“The choice of Jitsi was very much driven by our own requirements,” says Matthew Hodgson, a cofounder of the team that created Matrix and Riot. He’s CEO/CTO of the project’s corporate backer, New Vector. The user experience with Jitsi was better than with the video conferencing service they had used previously, which worked well only under ideal network conditions, he says.

As with Jitsi, Matrix is available as a free cloud service but can also be hosted privately by those who want tighter security and control. Matrix has also invested in an enhanced implementation of the Double Ratchet protocol, which is available for the Jitsi developers to build on. Once that feature ships, Jitsi will be an even more complementary pairing with Matrix and Riot.

3. There will be tradeoffs

Essentially, every participant in a Jitsi meeting is on the same level and can mute another user or even kick them out.

Those switching from a commercial online meeting product to an open source alternative should be prepared to lose some features they may have enjoyed on their old platform. Whether those things are deal-breakers will vary from user to user and organization to organization, and they may be offset by the advantages. Still, I thought I’d share a few notes based on my initial use of Jitsi and Jami, the two products I’m giving the most attention here.

Jami currently doesn’t support large video meetings. Without a server to mix video feeds of all participants, the computer of the person who initiated the call must serve that purpose. If you’re going to host a meeting with more than a few people, that computer needs to be a powerful one with a strong network connection. Currently, the developers recommend against using the software for calls with more than 4 to 5 people – although they hope, within a few months, to ratchet that up in stages to 16 and then 32 users.

The meeting controls are also a work in progress. You can’t change the screen layout. A user can screen-share, but that image takes over the square where their face would otherwise be displayed.

Having previously written about maintaining administrative control of meetings conducted over Zoom, I noticed the relative absence of meeting host controls in Jitsi. Essentially, every participant in a Jitsi meeting is on the same level and can mute another user or even kick them out of the meeting. This is very democratic, but it might not be what you want in a meeting where you don’t 100 percent trust all the participants or where there might be an opportunity for someone to crash the party, Zoombombing-style.

Ivov says the developers previously focused their security efforts on limiting who is admitted to a meeting, but they are currently working on additional administrative controls for the 8x8 version of the video meeting platform.

On the other hand, I liked the Jitsi control allowing you to mute everyone except the person who is currently speaking better than Zoom’s implementation of a similar feature. And Jitsi offers participants a lot of control over screen layouts, allowing them to resize and rearrange video streams in a multi-participant meeting. If you want to embed video conferencing in another application, WebRTC and JavaScript API make that relatively easy. For example, the Italian online learning program WeSchool is using that approach.

What’s more important to you? Cost? Control? Customization? Or simplicity? Your answers to those questions will determine which, if any, of these open source options makes sense for you.

[ Culture change is the hardest part of transformation. Get the eBook: Teaching an elephant to dance. ]