Looking for projects to keep your kids busy this summer - and teach them some tech at the same time? How about programming a tank and building a Raspberry Pi device? 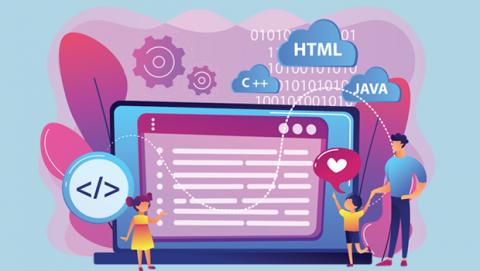 [ Editor's note: Many IT leaders are passionate about passing a love for technology on to the next generation. In our new occasional series, we'll spotlight STEM projects you can do with kids. ]

Many people think that youngsters are born understanding tech these days, but I’m inclined to disagree. Most children know plenty about consuming media on a tablet or playing games on a console – but that’s not the same as being a “techie.” These activities don’t help kids understand how computers work or build the foundation for a career in IT. And as somebody who was a geek long before it was chic, I’ve always liked the idea of my children following in my footsteps.

In this article, I’ll describe a few of the ways my two young boys and I have bonded over technology. You may have some similar stories of your own, or perhaps this will inspire you to explore some new tech experiences with your kids. 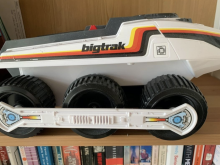 Launched in 1979, the Big Trak was one of my favorite childhood toys. It’s a six-wheeled electronic vehicle that can remember a sequence of simple commands (i.e., forward six, right two, forward four). Below the surface, however, it’s subtly teaching the basics of programming.

The Logo programming language works in a similar way, and those of us fortunate enough to have a good computer lab back in the 80s got to use it to control a very rudimentary robot.

I didn’t buy a new Big Trak specifically for my son. The toy was relaunched in 2010 and I snapped one up several years before he was born. But I was very keen to introduce him to this fun toy that could sneakily teach a valuable skill.

My first attempt was not successful. The vehicle moved loudly and independently, sending my son running, trembling, to his mum for comfort. But I tried again when he was five, and he adored it. I was impressed by how quickly he worked out how many units of movement it would take to move the truck to a specific place in the house. Turns were harder to explain, as they work on a clockface basis – but hey, he got to learn a little about telling time, too!

The Big Trak is hardly a long-term project, but it’s a great introduction to programming. It also looks seriously cool on the shelf – at least, I think so.

If Big Trak inspires a voyage of discovery around Logo programming, there are lots more projects you can jump into with your children.

The Raspberry Pi (more on this below) offers loads of options for playing with Logo, and some people have even built turtle robots around the device.: Check out this project. The built-in Python interpreter includes support for Logo commands.

More visual learners and younger kids will enjoy Scratch. With similar commands to Logo (and even the Big Trak), it’s a great way to create games and animations.

The notion of having a “family computer” has been an ongoing dilemma in our household. I always thought the boys would argue about it more than use it. But when COVID-19 struck and lockdown began, I changed my stance – a little.

I did some research into the feasibility of using a Raspberry Pi as a proper home computer and purchased a kit. My eldest son and I then headed to the office to build it.

It was a fun little project. My son particularly enjoyed sticking down the heatsinks and working out where the cables went, and he’ll always have the pride of knowing he “built the computer.”

My son will always have the pride of knowing he "built the computer."

I admit I was slightly disappointed that my education plans went slightly awry the moment he noticed that the OS included a preinstalled version of Minecraft. However, the general idea of using a Raspberry Pi as a rudimentary desktop PC was a sound one.

LibreOffice, also preinstalled, is sufficient for the kids to do some typing. Left disconnected from the internet, they can’t do anything harmful on this computer, and even if the younger one does somehow manage to shell-script the OS to destruction, we can just wipe and start again. 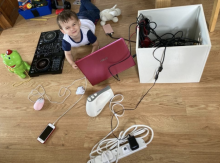 Getting my older son fired up about tech takes some nudging. He’s happy to watch endless YouTube clips, but he’d rather watch me play games than play them himself. And much as he enjoyed putting the Raspberry Pi together, he doesn’t show much curiosity as to how these things work. I suspect he will more likely call an IT person than be one himself.

But then there’s the two-year-old, Frankie, whose favorite toy is my large drawer of spare plugs, adaptors, and cables. His play with these items is far less random than it looks. He’s methodical in his exploration, and we were particularly stunned when he managed to power up my DJ console using my wife’s charger block (for the record, he’s not allowed that anymore!).

As I mentioned above, the children of today aren’t born with technical savvy – it’s clear that my younger son is interested in how things work. When he’s old enough to build a Raspberry Pi, he’ll probably be more concerned with overclocking it than trying out Minecraft!

Either way, providing the environment for technical exploration is easy, inexpensive, and rewarding. It’s also given us some memorable family moments and helped us keep busy during lockdown.

I’m fascinated to see where the coming years take my sons’ diverse interests in technology. But I want to make it clear to you, as I have to them: The Big Trak does actually belong to me.

[ Boost your happiness — and your productivity: Emotional intelligence: How to be happier at work. ] 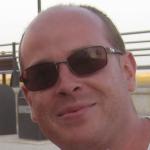 Ben Taylor has worked in tech since 2000, following a path from desktop support to Head of IT to freelance consultant. He’s also the Founder of HomeWorkingClub, a resource portal for freelancers and remote workers.
More about me