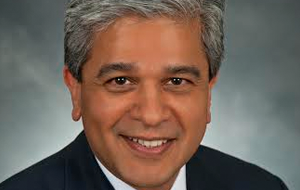 Anil Cheriyan is Director/Deputy Commissioner, Technology Transformation Services for the U.S. Federal Government. Previously, he was managing partner of Phase IV Ventures, a consulting and advisory firm. Prior to launching Phase IV Ventures in April 2018, Cheriyan served as Executive Vice President and Chief Information Officer at SunTrust Banks, where he led the digital and data platform transformation of the bank, driving architectural decisions such as APIs, robotics, data lake, Zelle, and cloud that improved client experience and drove the bank’s efficiency in today’s evolving digital, financial ecosystem.

As CIO, Cheriyan was responsible for SunTrust’s overall information technology, cyber security and business enterprise operations – i.e., contact centers, deposit and payments operations, and supply chain. He reported directly to the Chairman and CEO and was instrumental in providing technology direction to the Executive Committee and the Board of Directors. He chaired the firm’s strategic investment committee that oversaw investments decisions and benefits realization of those investments.

Prior to joining SunTrust, Cheriyan was a Vice President / senior partner at IBM Global Business Services, where he served financial services clients and most recently led the Insurance Industry Practice. Before joining IBM, he was a partner with PwC Management Consulting and served in leadership roles including leading global, industry and technology practices. In his consulting career, Cheriyan worked closely with several Fortune 500 companies in their business and technology transformations from strategy through execution – always delivering on measurable results. In addition, he has led the growth of several successful consulting practices with revenue generating, management and delivery roles.

Cheriyan plays an active role in business and technology communities. He serves on the advisory boards for growth stage startups – Tricentis, Fenergo, Mirantis and SkyTap - working on their growth / revenue generation committees. He is an advisory partner to Insight Venture Partners Ignite Roundtables, and he chairs the InspireCIO innovation committee. In addition, as SunTrust CIO he chaired the Financial Services Roundtable BITS Executive Advisory committee, and was member of the AT&T Client Advisory Committee and President’s Advisory Committee for Oracle.

Cheriyan earned his Master of Science and Master of Philosophy degrees in Management as well as a Bachelor of Science in Electronic and Electrical Engineering from Imperial College in London, UK. He and his wife, Susan, have three children and live in Atlanta, Georgia.

Digital transformation in federal government: 6 key elements for the future

COVID-19 is helping organizations focus attention on what digital transformation should be all about...

AI and RPA in federal government: The time is right

CIOs must evolve their own leadership skills in three key areas – or fall behind in the digital age...

12 tips to survive the IT talent crisis

The war for IT talent is still going strong as the unemployment rate in technology fields hovers...

Enterprisers Project 3-year anniversary: A look back at top articles and what's changed for CIOs

This week, The Enterprisers Project celebrates its third anniversary. We've had a front-row seat to...

One of the biggest challenges facing CIOs at companies large and small is the struggle to find and...